Rohit Sharma's first ODI in 10-weeks began with a touch of nerves. He was even kept scoreless in one Angelo Mathews maiden. By the end of the innings, there was no shot he had not played. No part of the ground he had not exploited. No bowler who escaped his brutality. Rohit amassed 45 more runs than any ODI batsman had ever managed in an innings, finishing on 264 from 173 balls when he was finally caught off the last ball of the innings. India, almost incidentally, had moved to 404 for 5, despite having traveled at a run rate of less than six for the first 32 overs. 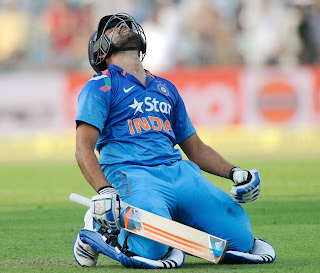 Rohit's innings was so outrageous that the first 100 runs, which were hit at a run-a-ball, seem achingly humdrum in comparison to the 164 that followed. The surge had actually begun before he reached his century, when he plundered 14 runs in four balls, in Nuwan Kulasekara's 30th over. Soon after that, the ball would be leaping off the middle of his bat with almost every stroke he offered.

There were many incredible shots, from among his 33 fours and nine sixes, but the most gobsmacking was the six off Kulasekara at the end of the 48th over, when he walked across to off stump, took a half volley from about a foot and half away from him and flicked it high over the midwicket boundary. It was the kind of shot, and innings, that seemed in open defiance of physics.

Sri Lanka had played a tour match against Mumbai to warm-up for the series, but little did they know Rohit was warming-up against them. He hit 142 from 111 in that match - his first competitive game since fracturing a finger in August - and he has now re-embedded himself at the top of the India batting order in the most resounding fashion imaginable.

The most dispiriting aspect of the flogging for Sri Lanka was their complicity in it. Shaminda Eranga had extracted a thick outside edge from Rohit in the fifth over, and though the ball carried comfortably to Thisara Perera at third man, he shelled the chance. Having been dropped on four, Rohit would become the third India centurion this series, to have been reprieved early in his innings. It makes sense, then, that since he hit a double-century, he should be dropped twice. Seekkuge Prasanna obliged him, when he shelled another straightforward chance off Rohit in the 46th over, with the batsman on 201 this time.

Nuwan Kulasekara had strayed too straight to Rahane, in particular, who picked him off for a spate of legside fours to kick the India innings into gear, in a 14-run first over. Angelo Mathews and Eranga delivered more disciplined new-ball spells, claiming a wicket each inside the first 15 overs, but that is as good as the visitors' bowling effort got. Sri Lanka's lines and lengths worsened gradually from the 20th over onwards, until they had become almost farcically bad by the 35th.

Another beautifully orchestrated batting Powerplay from India - between the 29th and 34th overs - brought them 67 runs, and was enough to hammer the Sri Lanka bowlers off their rhythm for the rest of the innings. Short, wide deliveries, thigh-high full tosses and rank long hops were presented with alarming regularity, and the fielding was almost as woeful. Sri Lanka had not expected to begin the series strongly, given their lack of preparation, but in these two disciplines, they have actually worsened significantly through the tour.

Having been joined at 59 for 2, Kohli and Rohit put on 202 brisk runs together, before miscommunication between the wickets saw Kohli run out for 66. That wasn't even the most astounding partnership of the India innings. When Rohit and Robin Uthappa came together in the 41st over, the score was 276 for 4. They would put on 128 runs in 58 balls together. Out of that, Uthappa's contribution was a run-a-ball 16.

By the time Rohit hit Kulasekara down Mahela Jayawardene's throat at long off, the record for most fours struck in an innings had also tumbled, and Rohit was in possession of half the ODI scores over 200. One record he missed out on by one delivery, was Sunil Gavaskar's record for most balls faced. Gavaskar had made 36 not out.
Posted by News Updater at 9:30 PM 1 comment:

The most charming and beautiful Kulu valley spreads out its charm on either side of river Beas. The valley runs north to south of this river and is 80kms. long and about 2kms. at its broadest. Yet with awe inspiring glens and mossy meadows encircled by the rushing streams and meandering brooks, flung east & west, a fairly wide area is open to the tourists, the trekkers, the mountaineers, the artists and to anyone who wishes to escape the heat & dust of the plains to breathe the exhilarating air of the Himalaya and enjoy the spectacle of the variegated mountain scenery. The valley is also famous for its exquisitely woven colourful hand made shawls and kullu caps.

Autumn: September to November for trekking, climbing, sight seeing and river rafting
Winter: December to February- snow-skiing and heli-skiing in Manali and above
Languages: Hindi, Punjabi, Pahari, English are understood and spoken by the people engaged in tourism trade
Clothing:Cotton and tropical in summer and heavy woollen in winter


Air: Kullu is connected by Indian Airlines and Air Deccan with Delhi. The airport is at Bhuntar, 10kms. from Kullu.

Rail: Nearest convenient rail heads are Kiratpur and Chandigarh on Broad Gauge and Jogindernagar on Narrow Gauge from where Kullu can be reached by road.

Posted by News Updater at 12:41 AM No comments:

Al Gore, who should have been President in 2000, endorsed Barack Obama today :

"I present to you the next president of the United States, Barack Obama!" Gore said in a brief introduction of Obama at a Detroit fundraiser. He planned a later appearance with Obama at a 20,000-person rally at the Joe Louis Arena.

In a letter to be e-mailed to Obama supporters, the former vice president and Nobel Prize winner wrote, "From now through Election Day, I intend to do whatever I can to make sure he is elected president of the United States."

Once Obama wins, I hope he chooses Al Gore for an important position in the cabinet or some kind of ambassador to the world. It will take a long time for the country and the world to recover from the Bush regime, but that would be a pretty good start.
Posted by News Updater at 5:53 AM 2 comments: